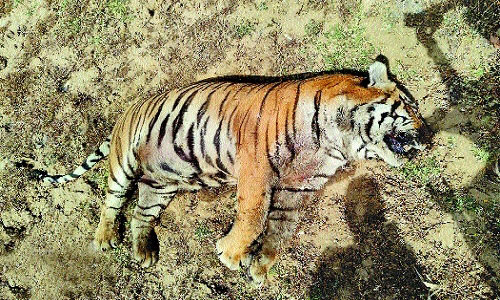 One of the oldest tigers in the Tadoba National Park died on Monday(23rd May 2022). Eighteen years old tiger Waghdoh was the father of 30 cubs. The carcass was found in the Sinhala range of Tadoba Tiger Reserve while patrolling the buffer zone of the forest. Tourists specifically crave for Waghdoh due to his natural flares in his persona.

Waghdoh was popular among tourists and having spent an early part of his life in Tadoba Tiger Reserve, (T-13) was followed by young tigers in 2015. Most of the time, you could have seen this tiger in buffer zone.

It is also saying that Tiger might have died due to old age, said Prakash Lonkar, Chief Conservator of Forests, Chandrapur. Earlier this week, a tiger had killed a shepherd in Sinala village and since then, Chandrapur Forest Division officials have been watching its movements, Lonkar said. The tiger harassed and killed a 65-year-man on May 21 when he tried to forage his goats inside the forest.

Tadoba National Park is one of the best natural habitats for tigers and other mammals. The world class territory is good in providing all essentials to mammals. All the animals in Tadoba feel safe to be here and there are less tiger poaching compare to other national parks.